During our November meetings, Carole Prevost, guild member and Cricut product representative, gave very informative presentations about the Cricut Maker. She created quite a stir within the guild as members realized the many possibilities this machine can do for our hobby!

The tool can be used first to design your project and then to cut it in a range of materials: fabric, vinyl, plastic, tissue paper, wood… Several lucky members won some wonderful prizes: fabric packs, irons, scissors, rulers, mats and a cutting tool. The grand prize – a Cricut Maker – was won by Colleen Paul.

Show & Tell this month featured some beautiful creations including a completed top for Outreach, a few butterflies created during October’s workshop, some sew-along blocks as well as a number of beautiful individual creations.

Remember to share your butterfly pics – any & all stages of progress welcome! – for a special ‘butterfly’ blog post: deadline to submit photos has been extended to November 17th: prize will be drawn at December meetings.

Our October day and evening meetings both featured Monique Wilson of Apple Hill Quilting. Monique shared over 30 quilts in a range of styles from traditional to modern. One common thread is that all the quilts featured accomplished quilting.

Here’s Monique showing the quilt design visible from the back of one of her pieces:

In addition to Monique’s trunk show, Show & Tell was a highlight at each meeting. Check out José Berthiaume’s rainbow cushion cover:

See you in November!

The guild season is off to a great start with 2 lively meetings under our collective ‘belt’ for September J.  The calendar of events was shared: there is so much to choose from!  New this year: day & evening programs will be more closely aligned so that everyone benefits from similar programming.

Many new members were welcomed: guild membership now stands at 120 members.  Hello new members: we are so glad to have you among us!

– instead of a mystery quilt, we will have a sew-along this year

– there will be a design challenge: create a placemat or table runner

– 4 exciting workshops are being offered, 2 by our very own members Pat Bradley and Louise Charlton and 2 by invited guests

– the Outreach team has new patterns for us to work on: note that Sew Days are moving to Thursdays

– last but not least, there will be an IFFI (I finally finished it!) challenge: bring your finished quilt (started at least 2 years ago) to the December meeting.

There is so much to choose from that it could be overwhelming, except that we have the newsletter as a reference with all the details. As usual, Show & Tell was a highlight; at least one new member jumped right in and shared some quilts at the evening meeting. Until next month, here’s some Show & Tell ‘eye candy’ for you to enjoy:

Summer is winding down, which means one thing around here: a new BQG quilt season is just around the corner!  (OK, we concede it could mean back-to-school as well, but priorities, right?!)

We are pleased to be welcoming several new members to our guild this year: we had so much interest that we decided to increase the overall membership number so that more people can join the fun J.

The first meetings of the year are:

Both meetings are held at Centennial Hall.  New members: you are welcome to attend one or both meetings!  For those of you who completed projects over the summer, bring them in for Show & Tell, always a highlight of our meetings.

Members: More details will be coming your way soon via the guild newsletter: watch for it on Friday, Aug. 30th. Please contact Josée at joseequilt@bell.net if you do not receive your newsletter by Sunday night.

Beaconsfield Quilt Guild hosts a major show every 2 years and the 2019 show celebrated the 40th anniversary of the guild.  It was held May 3-5 and was a resounding success from every perspective:

One highlight was the ‘tree forest’ that greeted visitors on arrival: Several members took part in a challenge to create a vertical panel with a tree theme.  These were displayed on either side of the entrance to the show, giving the feeling of walking through a forest path.

This show was a judged event and the winners were:

In addition, Caitlyn Hebert won the Joyce Keays quilt which was a draw for Guild members only.  Finally, the show quilt, which was displayed at the front-of house, was won by Joanne Davis.

As the saying goes “many hands make light work”: many volunteers worked countless hours to prepare, set up and take down the show.  In addition, many sponsors supported the show… thank you to everyone as each contribution was appreciated. Sincere thanks to our show organizers, Sonya Houde and Debby Soll for a job well done!

It is our hope that everyone who volunteered, attended a workshop or lecture, displayed a creation or visited the show came away with a new skill, new knowledge or fresh inspiration… and we look forward to doing it all again in 2 years’ time! 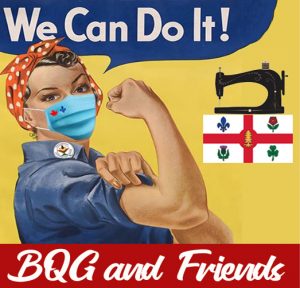 If you are a BQG member and haven’t yet registered to the members-only area, please click HERE.